Since Bill Frater (No Depression) announced Little Lonely's debut in 2013, here's what the press had to say ...

"Little Lonely takes me back to the days of Loretta Lynn, Tammy Wynette and Lynn Anderson with a modern nod to my new favorites, Zoe Muth and Amanda Anne Platt (The Honeycutters). This is an all-star band behind her, folks.  The reason you don't notice is because they are that f**king good. Little Lonely may be Americana, by today's standards, but this song is pure sixties Country to  me - you know, just after they dropped '& Western'. This album is as good as anything the major labels have put out in the past 50 years.  As far as I'm concerned, she is already a star.  She doesn't need a major label.  She just needs to be heard."  Frank Gutch, Jr., Segarini:  Don't Believe A Word I Say

"If you can find it, get one of the truly remarkable if under appreciated albums of the year - Little Lonely.  She sings of the America where most people live - poignant, insightful, unsparing but very, very caring.  Quick to laugh, long to lament.  A truly original voice in all ways.  Willie, Cash and Emmylou at their thoughtful, poetic best walk some of the same streets."
International Review of Music

"With a uniquely appealing, girlish voice, kind of a cross between Bernadette Peters and Brenda Lee, alt-Americana singer-songwriter Little Lonely (Julie Cain) can be quirky, melancholy or darkly humorous. She creates surreal imagery of country carnivals, the Dust Bowl, time machines and roadside stores. She's an ingenious lyricist and her melodies go in unexpected directions, while proving memorable. An interesting array of instrumentation helps shape the atmosphere. Among the distinctive songs are "Penny's First Available," Top Stair," "The First Time You Left Me" and "Jesus Is In My Swimming Pool." Come on now, dive in and explore the uncharted waters of Little Lonely!"  Pop Culture Classics

Little Lonely stole our heart with her debut release and she hasn’t given it back yet. This American heartland wanderer is the musical sweetheart we all dream of. Her music is beautiful and powerful and so personal it talks to your soul and touches your heart like no other album this year. Congratulations Little Lonely!  Critic's Choice Album of the Year, 2013 RUST MAGAZINE

"4.5 out of 5 stars. It's time you make room in your iPod for Little Lonely, whose self-titled debut album is one of the best indie folk releases thus far  in 2013.  This one is a must, folks."  The Daily News, PA

"When everyone was listening to Linda Ronstadt, there were people off in a parallel universe listening to Vandy, Karen Dalton and other organic singers lost to time and tide. This is one of those organic folk/rock things that grabs you when you least expect it and doesn't let go. Beginning her career playing in a funeral home when she was 11, you wouldn't want Ms. Lonely to lose her skewed view of things at this point, would you? Subversively mellow stuff that's masking the explosion below.  Check it out, it's a winner throughout.  Midwest Record

"Girlish vocals belie the understanding of human nature expressed in endearing pop ditties like the steel-washed “The First Time You Left Me,” “Jesus is in My Swimming Pool” and “Carnival King”.  Pasadena Star News

"Who would have thought that some offbeat, funky musicians based in the City of Angels would save heartland American Country Music?  Someone needed to save it.  [Little Lonely is] among the top two most beautiful albums I've heard so far this year."   Brian Arsenault, International Review of Music

"Julie Cain is the singer/songwriter behind Little Lonely and while there’s a country feel here, she’s neither Shania Twain ‘nor Loretta Lynn.  Cain shows an extraordinary knack for painting accurate pictures with precious few choice words. She shares her wry observations on her America, with equal parts mischief and nostalgia.  Little Lonely, er, Miss Cain, displays an extraordinary amount of depth here. Don’t mistake her softer sounds for a submissive stance. She has much to say, but isn’t the sort to shout about it all. This quieter stance is part of her seductive charm."  Indie Music

"This is the archetypal blue collar heroine, and though she may not be a coal miner’s daughter, this album will surely be seen in years to come as one of the most crucial of musical moments in a historical sense. It’s that good. And better.  The competition is ON for album of the year.  Essential."  RUST Magazine

"Eleven tracks that recall the simplicity of times gone by. Our favorites here include "Penny's First Available," "The First Time You Left Me," "Little Lonely's Lament," and "Old US 40." Truly heartfelt stuff."  Babysue

"Should be called Little Lovely, because these songs, despite the reverb and distant mournful lapsteel suggesting they were recorded in a desolate, emotional desert, are as pretty and enchanting as an Arid Americana Artist ever." Roktober

"There’s this unique little voice that is somehow powerful.  What can I compare it to, or whom? Do I even want to? She’s worth hearing without suggestion.  But since critics are supposed to do stuff like that: wait for just a trace of Dolly Parton at her softest, a smidgen of Cyndi Lauper.  Nah, like them she’s her own self.  She can sing about the “burial ground of feeling” but she hasn’t stopped feeling. She’s unsparing –  maybe when you get old you’re just “a slower version of yourself”  — but she’ll give you a smile just as quickly."  International Review of Music

"'Carnival King’ (from the album Little Lonely): ­ Little Lonely uses a midway metaphor to help describe what getting to know their love interest feels like. It is sensory overload and even though the sights and sounds rushing in and around you seem to never end, it is all temporary. The bright lights and promises that manifest during “Carnival King” are short bursts of happy. Tomorrow when you go back to see the flags flying high the sky is empty. The noises that filled your head are silent, making you wonder if all you heard was real...just like love." Alternate Root  - Top Ten Songs of the Week

"Once music fans listen to Little Lonely’s debut disc once they might just find themselves listening to it “All Night”. LA Music Examiner

"(Sean) Hoffman’s deft guiding hand helps Little Lonely hit all the right marks, as well as providing what Daniel Lanois calls “elements of danger” that differentiate the album from countless other female singer-songwriter albums; a searing guitar solo or two, synthesizer lines that fit because they shouldn’t, and ambient sound effects that give listeners a strong sense of place. But it’s Little Lonely’s distinctive voice that cuts through all of this, tipping a cosmic cowboy hat to torch and twang while retaining her signature theatrical emotive scope." Independent's Day

While I was on tour in the San Francisco Bay Area in January, 2015, I spoke to Bliss Bowen of Pasadena Weekly over the phone.  She was recovering from the flu and I from lack of sleep so we warmed up with some green tea and strong coffee.  We discovered some parallels in our early journeys from home (mine in the Midwest, hers the Northeast) and a shared love affair with Los Angeles.

Like it? Tweet it! SHARE IT!
In 2013, when Julie Cain started performing as Little Lonely in support of her album of the same name, it seemed to new fans that she’d emerged from nowhere with a fully developed sound and persona. That, she says, was “quite intentional.”

“I had been performing around under my real name and fine-tuning my song catalogue,” she recalls. “You can get to this point of analysis paralysis with your material, and I wanted to find the right producer who could bring the sound to a recording that I had in my head. While I was bringing my songs out to audiences and figuring out how they landed, I met up with Sean Hoffman.”

She immediately connected with the Loch & Key guitarist’s playing and sensibility, and shortly thereafter they commenced recording. Hoffman introduced many of the warm sonic textures that defined Little Lonely’s poignant, sometimes whimsical sound — as well as the name that Cain ultimately assumed for her new project.

“I wanted to sing under another name,” she explains, “because I think it’s helpful to the listener to project onto an idea. ‘Little Lonely’: What does that mean? It evokes a feeling. It leaves room for listeners to explore my music rather than have it be about my personality.”

If that sounds like a conceptual artist’s approach to music, it is. Cain studied sculpture in college and worked with mixed media before staging her music, which straddles the Americana-indie-rock divide. Prior to Little Lonely, the native Midwesterner performed around LA as Bitsy Lee — an evolutionary phase she laughingly allows had “a lot of shtick involved,” thanks to the accent, costumes and red wig she adopted. Performing as Bitsy Lee showed her that audiences responded to her music. Becoming a parent convinced her to plunge ahead.

“When you become a parent you think about what you want your legacy to be; everything you’ve been afraid to do you can’t be afraid of, because you can’t be an example of fear for your child. So I put a lot of hard work and heart into the record.”

She’s started working on songs for her next album and, true to form she’s already contemplating how to present it.

“As musicians we have to reinvent the way we want audiences to experience our music. I love it when someone can think outside the box and come up with something like [PJ Harvey recording in public as an art installation]. I think you’ll see more of that kind of diversification.

“I think a whole awful lot about context, I mean constantly. At the end of the day I want to look into the eyes of somebody and know that I pierced their heart [laughs]. Y’know? That’s what I live for. Connecting on a human level.”

I sat down with Joe Armstrong, producer and host of Independent's Day, who's interviewed everyone from PR maven, Kim Grant, to Doug Pettibone to Eleni Mandell. I joined him in studio with my producer and guitarist, Sean Hoffman, for what became a rather in-depth talk, with a little music peppered in.  It's nearly an hour long but if you skip to the final few minutes you can hear a magical take of "All Night".  Follow the image link. 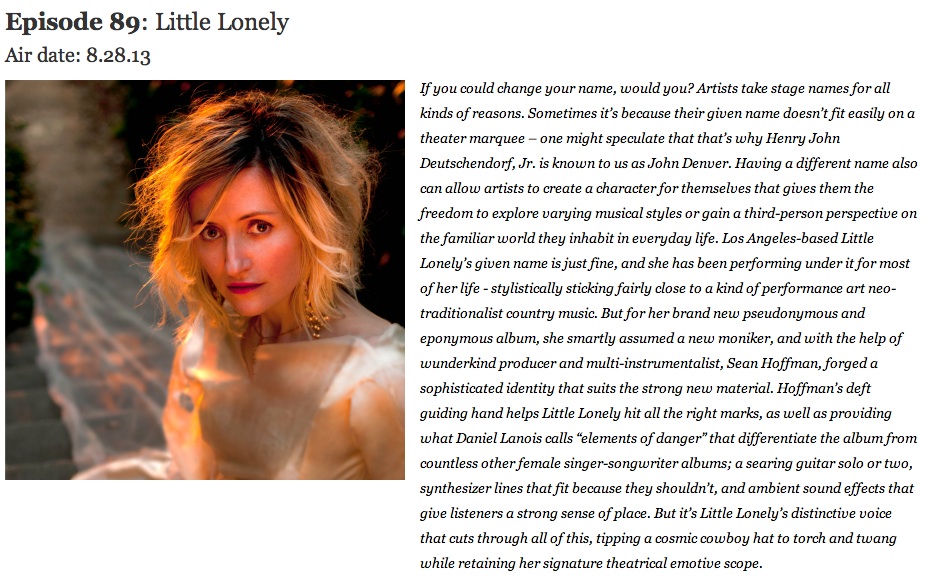 M. Alberto Rivera from Indie Music loved the record.  He reviewed it and scheduled a follow-up interview. My favorite question:  "Supposing you found Jesus in your swimming pool, what do you say?"  Follow the image link to have a read. 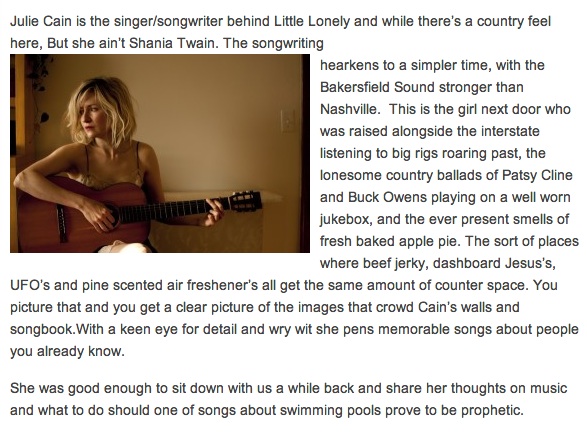 Just out of the gate, the record caught the attention of Ana Maria Harkins, COO of Kadmus Arts.  We caught up over the phone with thunderstorms roaring outside her window but we managed to get at least 10 min together. Follow the image link to the podcast. 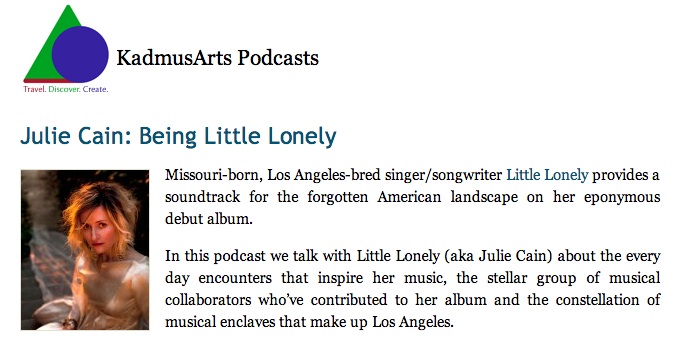